Which coffee is yours?
As if I don’t want to drink while my eyes enjoyed seeing the design.
I missed the place already. 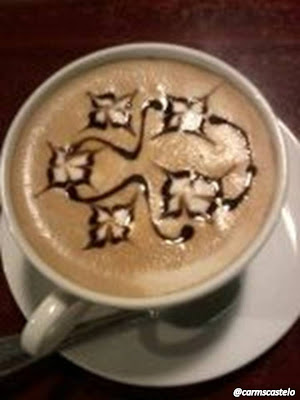 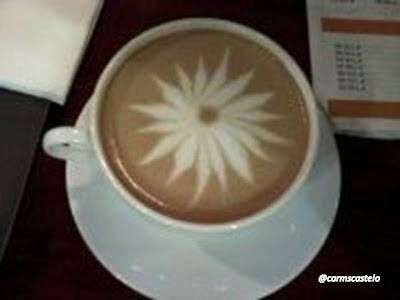 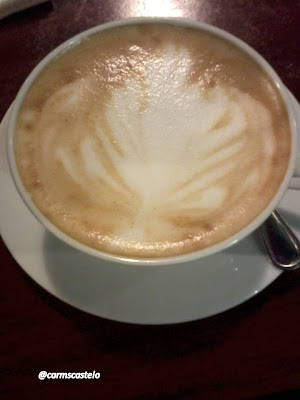 At O’Raileys Dine and Coffee.

Why Do I Eat in Jollibee? 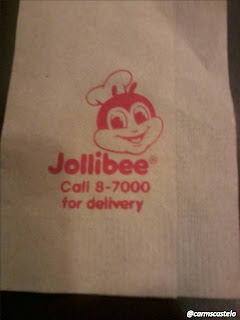 Two main reasons for me to eat in Jollibee.

1. While one may think of McDonalds, I think of Jollibee.
Jollibee is a Filipino chain of fastfood. That’s simple as that.

Jolllibee was founded by a Chinese-Filipino entrepreneur, Tony Tan-Caktiong. According to Forbes’ 2013 list, Tony Tan-Caktiong and his family belong to 11th richest in the Philippines     with a net worth of P1.7 billion as of July 2013.

“Chef's son Tony Tan Caktiong, started out in 1975 with two ice cream parlours. Now his Jollibee Foods is country's largest fast-food outfit, with nearly a dozen different chains including Jollibee, Chowking, Greenwich Pizza; more than 2,000 stores in the Philippines and 541 overseas. Wealth of restaurant mogul, who also owns Burger King franchise in the Philippines, got boost as Jollibee's shares gained 40% over last year on rising profits. In March, Jollibee opened its first outlet in Singapore, where company it has partnered with hotelier Jennie Chua. Wife Grace is president of the Jollibee Foundation.”

2. I have a few shares in Jollibee. Jollibee is trading in the Philippine Stock Exchange as JFC (or Jolibee Foods Corporation). The latest market price per share for JFC amounts to P176 according to my COLFinancial account. It takes a BoardLot of 10 for one to be able to buy a minimum number of shares of JFC. (I started investing in the stock market for my retirement purposes. I may have very few shares but I think it is better to have one than to have zero.)
Posted by Carms Castelo at 12:56 AM

I used the term “blockbuster.” Blockbuster to me means a long queue of people for a phenomenal movie. In Trinoma, an Ayala mall in Quezon City, a donuts store where donuts are like movies; people line up like that of a blockbuster movie.  The store is an outlet of J.Co.

I did a little of online research. According to Wikipedia, J.CO Donuts & Cofee is a café retailer in Indonesia specializing in donuts, frozen yogurt and coffee. The coffee is owned by and managed by Johnny Andrean Group .  It began trading since 2005.

For more information about J.Co Donuts, you can visit their website at http://www.jcodonuts.com

My Diet and Craving

I admit there was a time when I imposed a low low carb diet upon myself. Given a petite body of mine, others laugh at me when I say the word, “diet.” They find it unfit for me saying that word. Now my latest weight is 49.5 kilograms. Ten years ago, my weight was 47 kilograms, too thin which my former boss even called me malnourished.

This is an example of my dinner before. Two pieces of banana, one apple and yogurt. Sometimes, I replace yogurt with a glass of hot milk.

However, who would ever think that I too have cravings? Yes, I have. When I was in the paramilitary camp three years ago for my training, I had to eat two ice creams (in cone) in a day. Sometimes, when I was too stressed, I have to run to the store inside the camp that sells the Filipino ice cream.

Speaking of chocolates, the world’s famous brands of chocolates come from Europe but is there cacao in Europe? Anyone? As a sort of trivia, cacao (raw material for chocolate) was brought to the Philippines during the Spanish colonization. I have seen and read those accounts in some museums.

I also like Korean dessert. Korean sweets. Korean ice cream. There are more reasons for the Philippines to like Korea. Koreans top among the most number of tourists in the Philippines. For South Korea, imagine Korean War without the few Filipino soldiers who defended the parallel? In fact, a Korean War veteran was once a President of the Philippines – His Excellency Fidel V. Ramos. Thanks to Korea for returning all sorts of support to Philippines in various forms after the war.

With this, I can say that even in my food there is history in it.
Posted by Carms Castelo at 11:36 PM

Everywhere in the country, you see a lot of “silog”.
Tapsilog. Tuyosilog. Hotsilog. Longsilog. Tocilog.
Whatever the combination is, these silog’s come as Filipino foods.
I say:

I like it eating tuyosilog. I match it with sukang maanghang (spicy vinegar). Tuyo may be salty and not so friendly to people avoiding too much salt.

However, the moment I taste tuyo, I have to eat more rice, (carbo). To me, eating silog which is only in the Philippines is a gluttonous patriotism.

Silog. I patronize it. It is more fun eating silog in the Philippines…and it is gluttonous to me.
Posted by Carms Castelo at 10:39 PM

Not everyone is destined to be an artist. Only the gifted ones bloom and leave a legacy that which we call - that of an artist.

Artists have specializations. Painters, sculptor, singers, theater actors, stage performers; name those specialties and you have it. 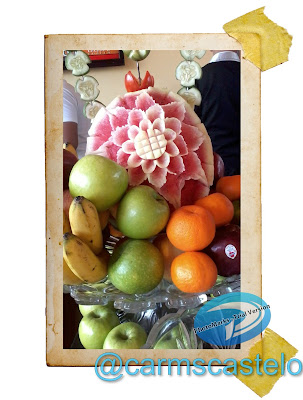 I was amazed by fruit sculpture. I saw this fruit sculpture as a centerpiece of an eat-all-you-can restaurant in Tacloban City. The fruits form part of the dessert.  I would have been happier had I met the person who made it.

As a lucrative business, fruits deteriorate soon. Unlike wood used for carving, fruits do not last long. Any mistake may mean a new one - a new raw material.

I have read an article before about a Filipina whose expertise is fruit sculpture. I forgot her name but I understand she belongs to the circle of few talented people in her turf.

I greatly admire people with skill as this. They belong to the chosen few and that they deserve all the accolades and recognition of my generation. Fruits indeed make artists.

Posted by Carms Castelo at 7:55 AM

I simply cannot forget a simple product as this hot sauce of Max's Restaurant. 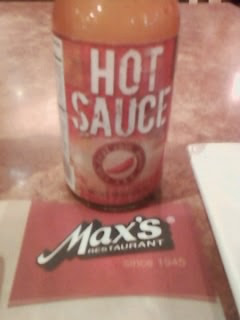 It may look an ordinary condiment but this made me cry. I was alone, so homesick, missing my kid then. I went to the restaurant to eat in a not-in-a-hurry pace. I chose Max's restaurant because I can sit well without worrying if others will be wait-listed. I don't have to hurry and worry even because crew are friendly and accommodating.

While eating, a kid in a table next to me approached me. She looked older than my girl. She waved to me and said, "hi!" I replied in my most polite way of saying "hello!"

Hot sauce reminds me of home. At home, we usually to eat spicy foods. We include chili in our menu. We plant "labuyo" in the yard and we love to include them in our meals.

Max's restaurant is a chain of chicken restaurants in the Philippines. It started in 1945 and now offers for franchising. For more information about this restaurant, visit their website at www.maxschicken.com
Posted by Carms Castelo at 7:06 AM